Reserve Rights (RSR) is an ERC20 token common across all Reserve tokens (RTokens). RSR can be staked on a particular RToken, where it has two roles:

All the relevant information regarding RSR’s supply, release schedule, audits, etc. can be found through the links below:

When RSR is staked on an RToken, it's deposited into a staking contract specific to that RToken, and the staker receives a corresponding ERC-20 token, representing their staked RSR position on that particular RToken. This token is transferrable and fungible with other staked RSR balances for that RToken, so you can send any portion of the staked position to someone else or trade it, and the new holder can un-stake it if they choose to. 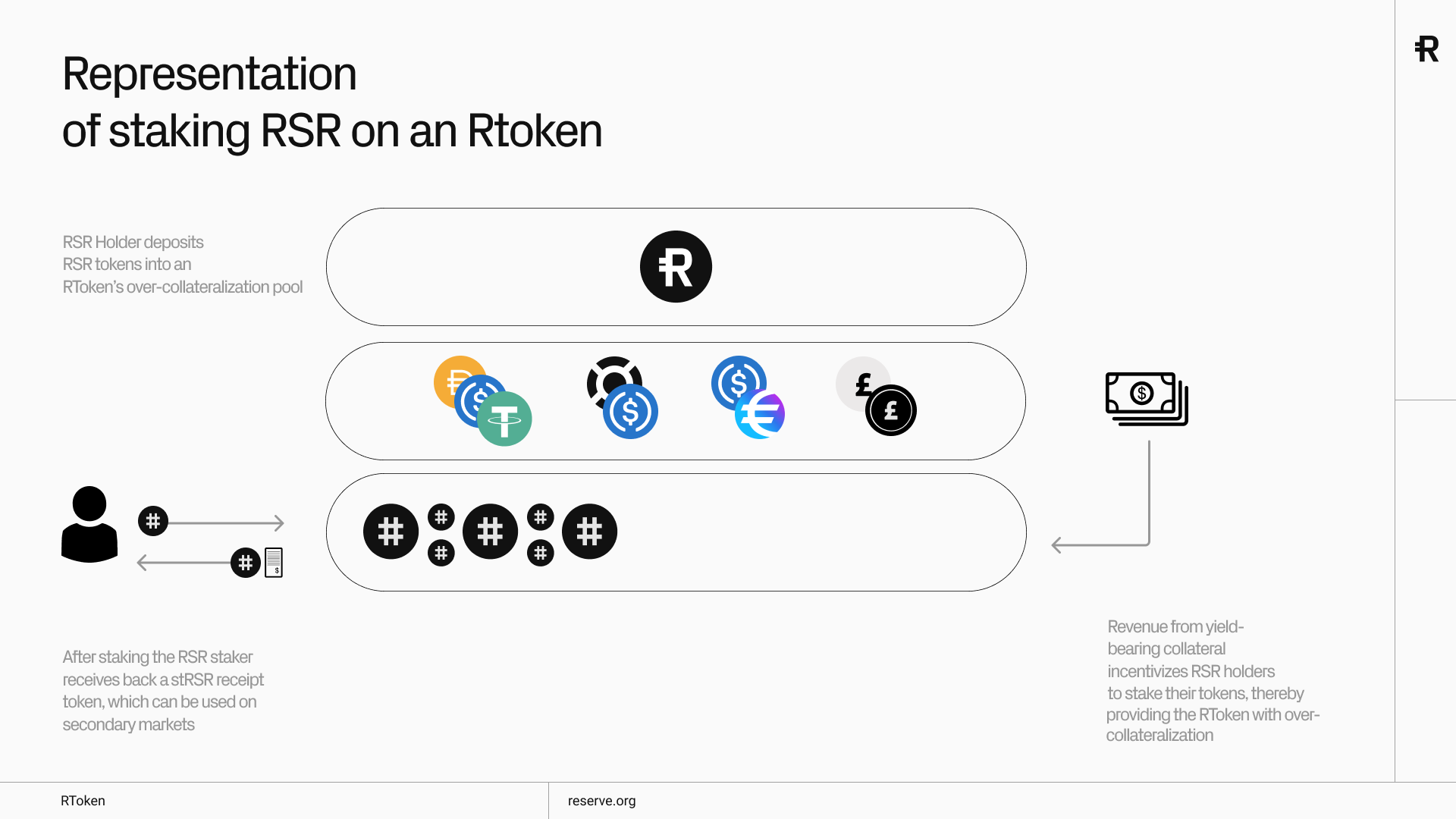 Staked RSR can earn rewards, based on three factors:

As a simple example, suppose (these numbers are just made up for simplicity, to make the arithmetic clear):

The protocol stores revenue in RTokens, but when staking rewards are distributed, it market-buys RSR via auctions with those RTokens in order to distribute the rewards to stakers in RSR. Thus, as rewards are earned, staked RSR balances increase.

When RSR is staked, it is actually at stake. Staked RSR can be seized by the protocol in the event of a collateral token default, in order to cover losses for RToken holders. It's seized pro-rata if this happens.

Un-staking RSR comes with a delay, which is configurable by governance, and predicted to usually be between about 7 and 30 days. This delay is necessary so that in the event of a default, the staked RSR will remain in the staking contract for long enough to allow the RToken to seize any RSR it needs to cover losses.

During the unstaking delay period, the staker does not earn any rewards. This is necessary to prevent stakers from withdrawing and re-depositing over and over in order to subvert the withdrawal delay mechanism.

While each RToken can have its own customized governance system, we expect most RTokens to use our default configuration where the amount of RSR tokens a participant holds serves as the voting weight.

If an RToken’s overcollateralization & governance is both done by RSR token holders, there is the incentive for the RSR governance participants to keep the RToken as safe as possible, rather than taking unnecessary risk with the collateral, as it’s their funds that would be seized first if any of the RToken’s collateral were to default.

The Reserve team has deployed a recommended governance system for RTokens (Reserve Governor Alexios) that will be suggested to RToken deployers by default. This governance system is a slightly modified version of the OpenZeppelin Governor.

The end-to-end process for approving & executing proposals is by default 7 days:

Within RSR Governor, each RToken can have two protecting roles assigned to it—the Pauser and the Guardian—which can be given to any Ethereum addresses by the RToken deployer/owner. Each have the ability to put their RToken’s system into certain states in the case of an attack, exploit, or bug. These states are:

More specifically, the Pauser can PAUSE and SHORT_FREEZE, while the Guardian can PAUSE and LONG_FREEZE an RToken’s system. For more information on pausing, short freezing and long freezing, please refer to the System States + roles section.

Reserve Rights (RSR) has a fixed total supply of 100 billion tokens, out of which there are currently 45.6b in circulation. The remaining 54.4b RSR tokens are locked. Out of these, 49.4b tokens belong to the Slow Wallet and 5b to seed investors, strategic partners, team members & advisors.

The locked tokens that are not part of the Slow Wallet (owned by seed investors, strategic partners, team members & advisors) are currently progressively being unlocked through the Option 2 unlocking (the tokens that were part of Option 1 have been fully unlocked since July 2022). More information about these unlocking options can be found below.