At this point in time, Reserve has developed a stable cryptocurrency (RSV) & a mobile application (the Reserve app) to transact it with. The purpose of this combined solution is to allow easy access to spendable digital US Dollars for people living in countries with high inflation or where digital US Dollars are not easily accessible.

Reserve is currently active in Venezuela, Argentina, Colombia, Panama & Peru and we soon expect to expand into Mexico. The app has over 500,000+ registered users (about 100,000+ weekly active users), and is accepted at 15,000+ merchants across Latin-America as a means of payment. Besides the app, Reserve is currently developing the (Ethereum) mainnet version of the Reserve Protocol - a set of factory smart contracts that will allow for the permissionless creation of asset-backed stablecoins. Once the protocol has launched, Reserve intends to help grow community-created Reserve stablecoins (RTokens) and make (some of) them available in the Reserve app. An initial type of RToken that the team intends to endorse is one backed by DeFi-yield bearing assets. Read more about what this type of RToken looks like here.

However, there has always been this long-term vision that the team has had since the start of the project, and we’re very excited to soon start to work on it by using the Reserve Protocol.

Taking a look at the history of currency reveals that, whenever a major world empire gives way to the next one, the value of the currency that the empire issued tumbles. Besides this phenomenon having happened with currencies such as The Dutch Guilder & The British Pound, recent speculation Ray Dalio states that “the US dollar is not destined to remain the world’s reserve currency”.

Bloomberg reported that “His concern — shared by BlackRock Inc.’s Larry Fink, among others — is that swelling U.S. budget deficits will eventually irk big buyers overseas. You easily could have a 30 percent depreciation in the dollar as the Fed has little choice but to monetize the national debt.”

This is the reason why the Reserve community intends to create a Reserve stablecoin (RToken) that is designed to go off of the peg from the US Dollar. In the very long run, the best outcome for cryptocurrency isn’t just to extend an existing currently-stable asset class, but to create something new that is equally stable in the short run, and much more stable in the long run. 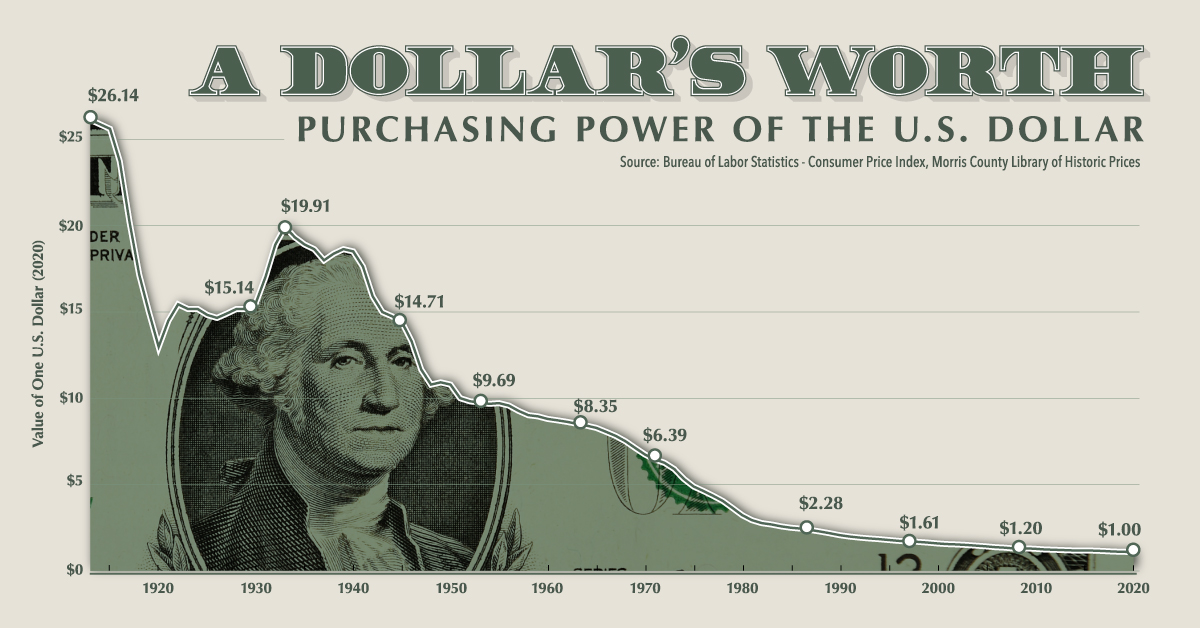 The value of the US Dollar continues to depreciate as time goes on.

We think it’d be really neat if there was a stable currency that kept its value with no inflation for centuries. Think about it. What if you could earn some money today and set it aside for your grandchildren, and when they spent it 100 years from now, they got to buy something just as valuable as what you could have bought right now? That’s not how fiat currencies tend to work, even the best ones like the US dollar.

The way we think this cryptocurrency should be built is by backing it with a diverse and well-structured basket of many different tokenized assets that will hold its overall value for a long time. These could include all kinds of precious metals, commodities, debt & equities.

With a sufficiently diversified basket of assets backing this new currency, its value might be able to follow the global GDP, which, during the world financial crisis of 2008 only dipped ~2%.

However, there’s two major challenges that we expect to face on this journey:

All that being said, we are extremely excited to start working on this part of the project together with the Reserve community and anyone else willing to join in. As more and more assets get tokenized, and decentralized governance systems evolve, we’ll be able to create more and more robust stable cryptocurrencies - and while we’re getting there, we’re building the platform to make it spendable everywhere you want in parallel.